What is SEER and how is efficiency measured?

Becuase of our unrelenting summer heat, we recommend to our homeowners that they choose a higher SEER rating rather than a lower rating.

Just as new cars get much higher gas mileage than older models, currently available heating and cooling systems can heat and cool your home using a lot less energy than older units. Efficiency is an important feature for you to consider in making a decision to buy a new home comfort system.

But what exactly is meant by efficiency? How is a unit's efficiency determined? To determine the efficiencies one can expect, the federal government has established numerical rating systems for cooling (SEER ratings), heat pump heating efficiency (HSPF ratings) and gas furnace efficiency (AFUE ratings).

The higher the SEER rating number, the more energy efficient the unit. Specifically, SEER is the total cooling output in BTUs (British Thermal Units) during a normal annual usage period for cooling divided by the total electric power input in watt-hours during the same period. It also indicates the amount of heat absorbed in BTU's per watt of energy consumed. For example, a 10 SEER system will absorb 10 BTU's per watt of energy consumed.

Measuring a heat pump's heating efficiency is very similar to measuring an air conditioner's cooling efficiency in that they both use electric power. The term used here is Heating Seasonal Performance Factor, or HSPF. HSPF compares the quantity of heat produced in a heating season to the quantity of electricity consumed. The higher the HSPF rating, the more efficient a heat pump is at heating your home. HSPF determination is essentially the same as for SEER:

HSPF = HEAT PRODUCED IN A SEASON (divided by) ELECTRICITY USED FOR HEATING.

You will see the EnergyGuide tag (shown above) on your unit, indicating its SEER (cooling) or its HSPF (heat pump).

What these efficiency ratings come down to is this: A unit with a higher SEER and/or HSPF rating is more efficient than one with a lower rating. It will deliver the same quantity of cooling or heating while using less electricity.

This means lower electric bills for you, and lower operating costs in the long run. This is especially true if you are replacing an older unit with a new high efficiency system, particularly when it comes to air conditioning. For example, many older units have SEER ratings as low as 8. So a new unit could be over twice as efficient and reduce your electric bills for cooling by as much as 59%.

Don't sweat the details! Let us help you get the most efficient unit you can afford.

When discussing a furnace's heating efficiency, the term used is AFUE. AFUE stands for Annual Fuel Utilization Efficiency and represents the percentage of heat delivered from the quantity of fuel used during a heating season. The higher the AFUE%, the more efficient the product. Calculated as follows

When you replace an older furnace with a new gas furnace, your heating costs could be substantially reduced. In the past when energy was inexpensive, much of the heat generated by an older furnace was sent up the flue pipe and wasted. Today's modern furnaces are design to capture most of the heat they generate. Some models are rated as high as almost 95% AFUE, meaning they convert virtually all of the fuel they consume into heat to warm your home. The right tag attached to your furnace indicates its AFUE rating

In Houston, we run our AC about three-quarters of the year. Having a more efficient unit can dramatically reduce your average electric bill. 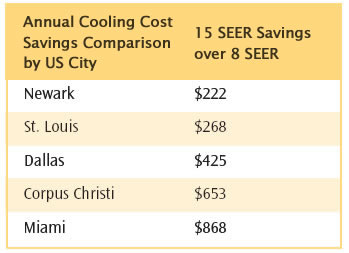 What type of refrigerant should I use? R410A is an EPA-approved, environmentally sound refrigerant. Plus, R410A offers performance improvements over the traditional R22 Refrigerant. Effective January 1, 2010, equipment designed for R22 will no longer be allowed to be manufactured. When you purchase new equipment from us, rest assured you will be getting the newer R410A standard. 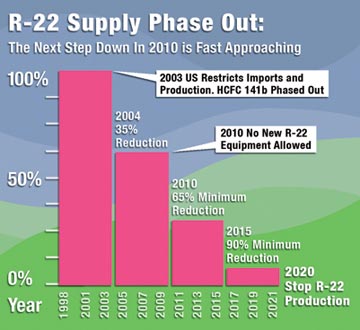 We love HVAC and we love The Woodlands!